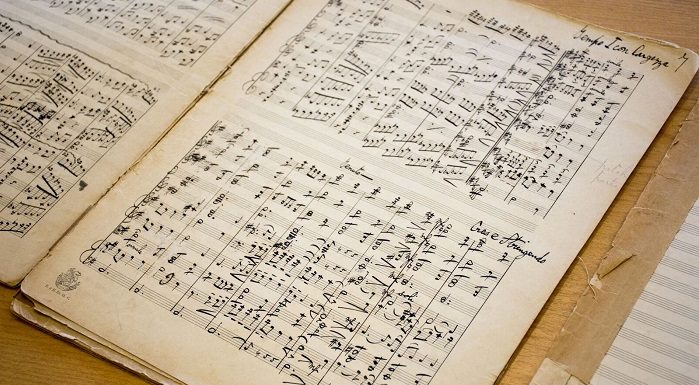 Two handwritten scores by Gustav Holst have been found in the library of a New Zealand orchestra.

Folk Songs from Somerset and Two Songs Without Words, composed in 1906, were discovered among the scores held by the Bay of Plenty Symphonia in Tauranga.

‘Our librarian, Gloria Pheasant, and I were cleaning up the sheet music library’, recounts Justus Rozemond, Music Director of the amateur orchestra. ‘We were throwing away tons of old photocopies and found these handwritten scores. We didn’t really believe we were holding genuine Holst manuscripts, but there was just enough of a tingle of excitement not to throw them away.’

Specialists at the Britten-Pears Foundation, which keeps the Holst Archive, were able to confirm the authenticity of the two scores. ‘We received a reply excitedly saying that the signatures and handwriting were original and authentic’, explains the orchestra’s Bronya Dean. ‘We were staggered. How did these manuscripts end up in a filing cabinet in our music library?’

It is thought that Stanley Farnsworth, a flautist from England who conducted a predecessor orchestra to the Bay of Plenty Symphonia, could have brought the manuscripts to New Zealand. ‘We have clues that suggest the scores were used by Farnsworth, but unfortunately that’s as far as the trail goes. We have no idea how Farnsworth came to have them, or what his connection was with Holst. It would be great to think that someone who hears this news might know more, and be able to help us complete the puzzle.’

The Holst Foundation’s Colin Mathews – who was himself commissioned by the Halle Orchestra to compose a concluding movement to Holst’s The Planets entitled ‘Pluto, the Renewer’ – said, ‘these manuscripts are a remarkable find, particularly the Folk Songs from Somerset which don’t exist elsewhere in this form.’

Setting folk songs collected by Cecil Sharp, the work received its premiere in 1906 but was never published. Three of the folk songs were subsequently reworked by Holst for a new work, A Somerset Rhapsody, published the following year.

The orchestra plans to celebrate the recovery of the scores with a performance in the near future.